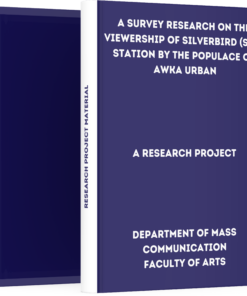 A Survey Research on the Viewership of Silverbird (Stv) Station by the Populace of Awka Urban ₦3,000.00 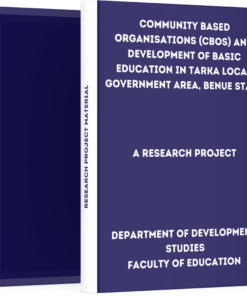 If you are interested in getting this project material “A Study of Television Programme Content and Audience Preference in Awka Urban”, click on the DOWNLOAD BUTTON to make payment and the file will be delivered to your email immediately after confirmation.

Download A Study of Television Programme Content and Audience Preference in Awka Urban. Mass Communication students who are writing their projects can get this material to aid their research work.

The Nigerian Television Authority also known as NTA was inaugurated in 1977 and is the government owned body in charge of television broadcasting in the country. NTA claims to run the biggest television network in Africa with stations in several parts of Nigeria.

Formerly known as Nigerian Television (NTV), the network began with a takeover of regional television stations in 1976 by the then Nigerian military authoritative, and is widely viewed as the authorities’ voice of the Nigerian Government.

The first official Director General was Vincent Maduka, a former engineer. Prior to his appointment Maduku was General Manager of Western Nigerian Television, Ibadan, which was African’s first television station.

By December 1979, there were scheduled television broadcasts from every state capital in the country. The decree establishing the NTA provides for one National Board and six Zonal Boards. The National Board has overall responsibility for policy and standards and remains the cooperate legal entity.

With the Director General as Chief Executive, he is assisted at the Headquarter by the Director of Engineering, News, Finance, programmes, legal and manpower resources. The Chairman of each Zonal Board is a member of the Central Board and the chief executive to the zonal Board is the Zonal Manager Director.

By the decree establishing the NTA, the Nigerian Television Authority became the only body empowered to undertake television broadcasting in Nigeria.

All existing state television stations were thereby taken over and incorporated in NTA. The Authority was organized on six zone structures such that each zone consists of 3 stations except for one which is made of four stations.

The production centre exists in each state to contribute programmes to the zonal output. When all the installations have been completed, it should be possible for anyone in Nigeria to receive any of the six zonal programmes by choice.