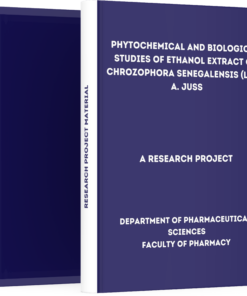 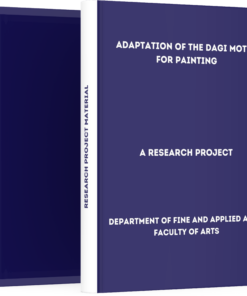 Adaptation of the Dagi Motif for Painting ₦3,000.00
Sale!

If you are interested in getting this project material “Effects of Marital Conflict Management Skills on Marital Stability Among Literate Couples in Northern Cross River State”, click on the DOWNLOAD BUTTON to make payment and the file will be delivered to your email immediately after confirmation.

Download Effects of Marital Conflict Management Skills on Marital Stability Among Literate Couples in Northern Cross River State. Arts and Social Science Education students who are writing their projects can get this material to aid their research work.

This study was undertaken to find out the acquisition of management skills and how this stabilizes a marriage relationship in term of conflict in the home.

The study was also aimed at discovering the effect of treatment on couples who attended a management skill programme and those who do not. A total of two thousand couples was selected by purposive sampling technique from ten churches in the Northern Cross River State.

The experimental group programme was packaged into four weeks interaction sessions, each lasting for one hour. Pre-test post-test using couple’s checklist was collected from the two groups.

The principles of using two designs were employed to adequately maximize the collection of data. Analysis of the research questions was done using statistical package for social science (SPSS), means and standard deviations while the hypotheses were tested using both t-test for independent samples and Analysis of Variance (ANOVA).

The institution of marriage is as old as the creation of man. It is the coming together of two persons in love with consent of parents, guardians and witnesses for the purpose of procreation and companionship.

In the context of this work, it is the heterosexual relationship of consenting adults who maintain some form of socially approved sexual relationship, sharing a common residence, engaging in economic co-operation and procreation.

Marriage is expected to be an affair of intimacy and compromise, where spouses complement each other.It is also expected to be “for better and for worse” but the current trend in the marriage dyad departs from these traditional assertions, as the marital union is today a mere association where rancour, conflict, savage mutual attacks are endemic (Burk, 2000; Dadi, 2004).

Today the couples tend to dwell together only when things are rosy and prefer to leave or separate when misunderstandings occur or when a conflictual situation arises.

Despite the threats of the disintegration in marriages, there are still model marriages whose dispositions give hope for badly managed ones. Conflict is said to be good, especially when the tension so generated leads to change which may be thought aggressive, yet ultimately ends in convincingly peaceful resolution.