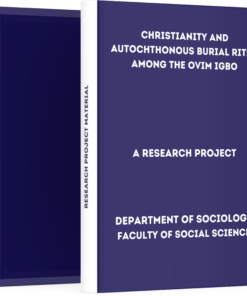 Christianity and Autochthonous Burial Rites Among the Ovim Igbo ₦3,000.00 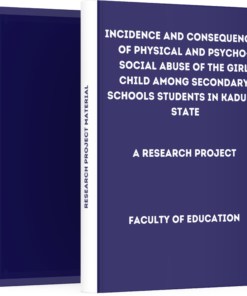 Incidence and Consequences of Physical and Psycho-Social Abuse of the Girl Child Among Secondary Schools Students in Kaduna State ₦3,000.00
Sale!

If you are interested in getting this project material “In Vitro and In Situ Biomass and Artemisinin Production in Worm Wood (Artemisia Annua l. Var. Chiyong)”, click on the DOWNLOAD BUTTON to make payment and the file will be delivered to your email immediately after confirmation.

Download In Vitro and In Situ Biomass and Artemisinin Production in Worm Wood (Artemisia Annua l. Var. Chiyong). Students who are writing their projects can get this material to aid their research work.

Artemisia annuahas been identified for its anti- malarial properties and millions of Nigerians are at high risk of being infected by the disease. Its propagation is hindered by shortage of seeds, germination problem and effective protocol forin vitro and in situ propagation.

The effect of some plant growth regulators (PGRs) on the in vitro regeneration of Artemisia annua using seed, leaf primordial, node explants and callus initiation were investigated in the Biotechnology Laboratory of the Department of Plant Science Ahmadu Bello University, Zaria.

Explants were surface sterilized and inoculated on Murashige&Skoog basal media supplemented with varying concentrations of plant growth regulators. Results of Analysis of Variance for the in vitro experiment indicated significant difference among the treatments (P<0.05).

In situ experiment was conducted on the farm of the Institute for Agricultural Research (IAR) ABU, Zaria. during the 2012 rainy season and 2013 dry season to determine the effect of some physical, chemical and hormone treatments as well as levels of organic and inorganic fertilizers on the growth, yield and artemisinin content in A. annua.

Cultivation of A. annua spread from China to Africa, mainly Kenya,  Tanzania  and  Nigeria  in  response to the call by the World Health Organization for the use of Artemisinin-Combination  Therapies (ACT). The  most  concentrated  areas  of  Artemisia  production  are  Asia,  Europe,  and  USA and  recently  East  Africa  (Klayman,  1993).